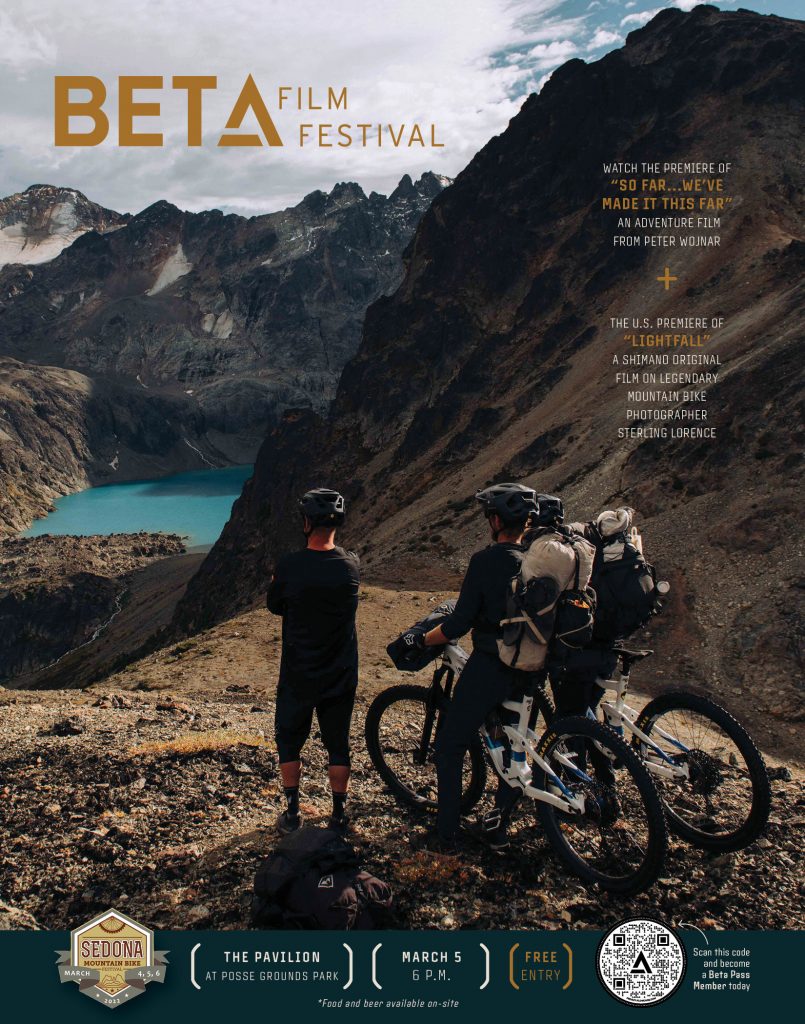 The Beta Film Festival is an annual showcase of mountain bike films, celebrating the beauty of riding through the filmers, athletes and storytellers who live and breathe the sport. It is organized by Beta MTB, a quarterly mountain bike magazine and website that’s part of the Outside Inc. media group.

In a world that feels so heavy, it’s hard to find things that lighten the mood, bring joy, and make you smile. But, if you look hard enough, try hard enough, and tap deep into your imagination, places of magic still exist. Places like Bandit Hill, Jill Kintner’s own world of whimsy. Produced by Juicy Studios. Run Time: 3:40

Premiere: So Far, We’ve Made It This Far

In constant search of the edge, a dynamic crew toes the line between risk and reward during an eight-day traverse of a remote subrange deep in British Columbia’s Chilcotin mountains. “So Far, We’ve Made It This Far” is an adventure film by Peter Wojnar, featuring Kenny Smith, Margus Riga, Kevin Landry and Fraser Newton. Run Time: 10:00.

Legendary mountain bike photographer Sterling Lorence delves into his creative process, and the motivations that have kept him seeking inspiration in the dark North Shore woods for decades. By Anthill Films. Run Time: 12:00

On Season: A Winter Weekend with Bellingham’s Shire Crew

The Shire crew, including Spencer Baldwin, Ian Carpenter and Scotty Scamehorn, are three of the PNW’s most prolific trailbuilders. Satchel Cronk spent a winter weekend around their hometown of Bellingham, Washington, digging trails and riding bikes. Run time: 4:30

Christian Rigal is becoming a household name in the mountain bike community for his fast paced, all-out approach to riding. His history in BMX is undeniable with some of the most stand out video parts of a generation but his new passion for mountain biking is a breeding ground for creativity and a chance to look at the world with fresh perspective. Rigal’s latest video part “Crossover” is his interpretation of how to ride a trail bike and what you can build when you collaborate and bring together a group of like-minded friends. To the purists, his different approach to riding might feel like a far cry from the more traditional side of mountain biking, but for Christian, it’s been a refreshing new way to push himself and see what’s possible on a big bike. Filmer: Darryl Tocco. Run Time: 3:30.

In this beautifully shot and scored video, Specialized rider Spencer Rathkamp delivers a personal note on mental health and how the seemingly simple act of riding can positively affect it. Produced by Alto Visuals. Run Time: 4:40.

Why I Ride is a self-shot short film by Louis Citadelle that pays tribute to all the aspects of mountain biking that I have learned to fall in love with. A journey through intense emotions and outstanding locations with the only goal in mind to reap the rewards of a narrow piece of trail awaiting to put a big grin on my face. Run Time: 6:00.

As women’s freeride pioneer Claire Buchar moved away from official competition, she found herself connecting with her surroundings in the moment and embracing the mental and physical challenges of a big day on the bike. When it’s late fall in Buchar’s Sea to Sky backyard, it always feels like the changing season is chasing away that last bit of warmth, dirt and light, before it’s time to fully embrace the winter. Filmed by Ollie Jones. Run Time: 2:20.

The powerful story of Claudia Jackson, her community, and the Tour de SiiHasin, a 400-mile annual bike ride across the Navajo Nation founded as an act of strength and resilience. The ride brings the community together for cultural connection, healing, wellness, and togetherness. The SiiHasin bike program was created to celebrate the simple fact that everyone should be able to experience the joy and freedom that only a bike can bring. That journey across the landscape takes you to places physically, mentally, emotionally, and spiritually that you might normally never go. The SiiHasin short film follows the riders during the ninth annual Tour de SiiHasin. Produced by Brooke Hopkins and Peter Gilbert in partnership with Giant Bicycles US. Run Time: 10:35